Paralympic athlete Dylan Alcott puts everything on the line

Paralympic Athlete of the Year Dylan Alcott is on a quest – not to win more gold medals, but to normalise disability for the wider community.

“Paralympian of the year – it’s a massive honour,” says Alcott. “There’s been some incredible people in the past who have won it and so many incredible athletes who won gold in Rio who could have won it.”

Alcott says the award means a lot for his sport and for athletes with disabilities, but it means more about disability as a whole.

“We are the positive role models who are holding the flame to try and change the perception of disabilities in the wider community,” he says. “Whether that’s employment, personal relationships, access – I’m really passionate about this. I want to normalise disability for people.”

Alcott says there are 4.5 million people in Australia with a physical or intellectual disability. Many of those people are hidden, because they don’t have the confidence to go out and they don’t want to talk about their disability or even accept that they have a disability.

“For disability as a whole and for aspiring athletes – kids with disability just like me – to show them that their life’s not over because they have a disability ... it’s not why I do it, I do it to win gold medals for my country and my family, but it’s a beautiful by-product.”

Alcott was born with a tumour wrapped around his spinal cord. The surgery that removed the tumour left him paralysed. He says he remembers being 13 and being bullied about his disability, and being embarrassed by it. “If I could have turned on the TV and seen someone like me that would have changed my world, it would have given me a positive role model to look up to,” he says. “I’m sure they were there, but I didn’t see them because they didn’t get the coverage.”

Alcott says corporate sponsorships are crucial to the survival of sports like his – the money is used to provide facilities, coaching, travel and tournaments. Such support builds participation and audience, which in turns drives revenue for the sport and for governing bodies like Tennis Australia. It works for the sponsors, too: they can engage with their audience in the positive and exciting environment of sport, plus it exposes their brand to a whole new audience.

“We are athletes out there winning, putting on a show and performing at the highest level, and we need to increase the awareness of that,” says Alcott, adding that 15 or 20 years ago, athletes with a disability had to pay to compete. “There was no funding, no-one cared. The changing of the tide is now and sponsors are realising that. If they don’t, they’ll regret not getting involved.”

One of the great lessons for him has been being courageous enough to have a go, even at the risk of failing.

Alcott says sport turned his life around. “I got fitter, I met people who were similar to me that I could relate to; it gave me the confidence to go out there,” he says. “I’ve travelled to 40 countries and I’ve won three gold medals in two different sports – not many athletes can say that.”

“I can’t stress enough the importance of putting yourself out there, on the line,” he says. “You might get knocked down a few times, but on the sporting field – in a professional and personal sense – you make your own luck. You’ve got to buy a ticket to win the raffle.”

Dylan Alcott will speak at CPA Congress during October in Adelaide, Brisbane, Melbourne and Perth on the topic of overcoming adversity to be the best version of yourself.

Paralympic athlete Dylan Alcott puts everything on the line 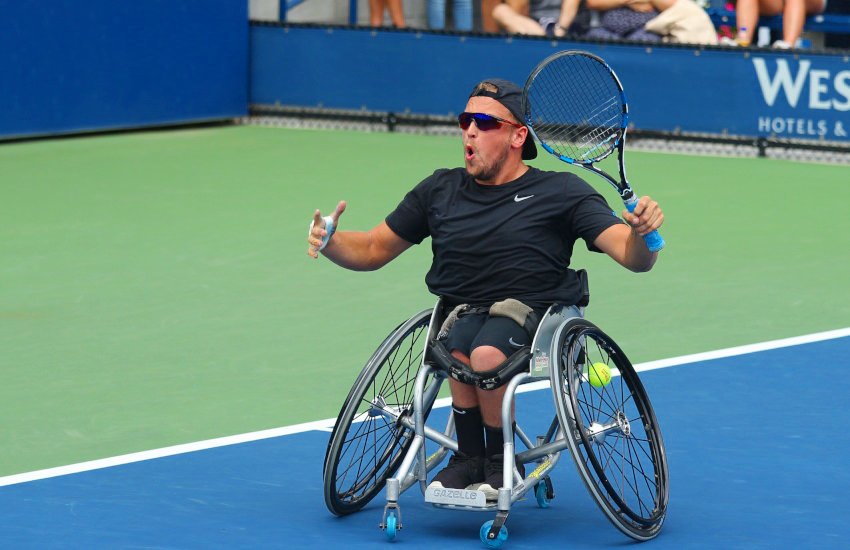