Being a woman in small business: my story

Since I entered the tech start-up space, I’ve become increasingly more aware of the impact being a woman has on how business leaders perceive and treat you.

My start-up Vollie has a 50 per cent gender split across its founding members and is run by myself and my business partner Matt, with an even split of work between us both.

While Matt is the more outwardly vocal advocate for our online skills-based volunteering platform, I am the one who is head of operations, making sure that every time Matt creates a new opportunity for us it is successfully managed and achieved.

As an agile start-up, we find this approach works for us – Matt is the heart and I am the head. Where he leads with passion, I can balance with logic. It is this approach that has given us the success we have had so far.

But for those people who don’t understand the way we work and our equality, they often perceive Matt as the lead and myself as just the support behind the scenes, which frustrates us both.

As the quieter co-founder and the female, it is easy for me to be pushed to the side when my counterpart is already a boisterous, tall and imposing male figure, as people do not always realise the equal roles we play.

Sheryl Sandberg (COO of Facebook) once said: “I want every little girl who’s told she’s bossy, to be told instead she has leadership skills.”

Jemma Wong, a strategic marketer and the creator of Girls Who Brand, believes it comes down to visibility.

“Visibility and endorsement of senior female leaders is key – it’s not only important for clients and customers to see, but for our younger industry talent,” she said.

“You can’t be what you can’t see, and I know from my own experience that women will be more productive and fast-moving towards opportunities if they can see tangible (not token) career pathways ahead of them.”

It is so important for those of us who are female founders and business leaders to get confident with stepping out of the shadows and into the limelight so that we can encourage the next generation of young women leaders.

Someone once told me: “If you walk into a room and someone is missing, you’re in the wrong room”.

When I walk into any one of the countless meetings, presentations, workshops, and start-up meet-ups that fill my calendar each week, I’m miffed that even as a Greek-Australian living in Melbourne, I’m often in the minority when it comes to the representation of leaders. While the majority of my daily communications are with wonderful women from Vollie’s non-profit family, meeting a female founder is still a relatively rare experience.

I’m not the only one who’s noticed an imbalance in the scales: research shows that entrepreneurs are “disproportionately white, male and highly educated”. When I look around the start-up environment, I’m still longing to see more female founders, more first-generation immigrants, and a lot more first Australians representing their own interests.

In the bid to create an equal playing field for all, there is an onus on the people who are currently taking up more than their fair share of the space in the room.

Try these heels for size

Ann Nolan is the co-founder of Snobal, a virtual reality start-up based out of Melbourne’s Inner West that has recently been accepted into HTC’s ViveX global accelerator program and the IBM Global Entrepreneur Program.

While Snobal is at the forefront of building VR tools for business, Ann recounts how she can occasionally encounter assumptions around the allocation of roles between her and her business and life partner, Murray.

“I have had Snobal introduced as ‘Murray’s company’ while I’ve been standing next to him,” Ann said.

“It’s tempting to put your hand up and say: ‘I created this as well!’”

And as parents, Ann finds even the most well-meaning of questions about balancing family life and founder life are directed at her, not Murray, illustrating perhaps the implicit bias that parenting responsibility sits with her.

In Ann’s story and the stories of female founders like hers, there is a simple solution at hand. Speaking from personal experience, a male co-founder who is proud to identify himself as a feminist and an advocate for equal rights is an amazing asset to have in your corner.

Every time I am treated less preferentially to Matt by an investor, fellow business owner or employee, I have both the confidence and support of my co-founder to assert my right to be treated as an equal. Hell, more often than not Matty is pushing my opinion over his if we feel that I’m not being seriously taken.

It’s an incredibly small thing for him to do, but it’s the helping hands from those above and the leg-ups from those below that make those steep hills that much easier to climb.

It takes a village to achieve just about any meaningful change, but if the village can’t see that it needs to change, then we’ve got a problem.

It’s basic maths: if 95 per cent of the funded Australian start-up community is male, as has been publicly reported, then that same 95 per cent can wield a lot of influence about what changes we need to make.

For those of you out there who don’t speak up for others or promote the representation of people of all types, doing it will make a world of difference to the women you work with, for the women you invest in and for the women who might one day work for you.

Tanya Dontas is the co-founder and chief operations officer of Vollie.

Being a woman in small business: my story 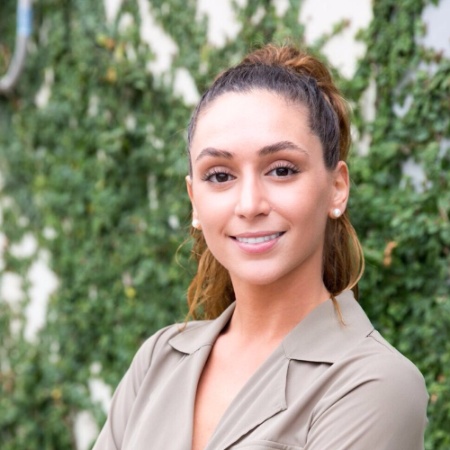