Time running out for 50,000 ‘nervous’ directors with ATO debt

The clock is ticking for thousands who were given a stern warning by the ATO to act on their tax liabilities late last month.

More than 50,000 ATO letters demanding debt repayment by company directors had delivered a “jolt” last month that spurred many into action as time runs out for them to respond.

Grant Thornton’s financial advisory partner John McInerney said the warnings of imminent director penalty notices were working as intended with many directors “nervous and confused” but no longer “dragging their heels”.

“The letters are sent to the homes of company directors, as opposed to their adviser/tax agent,” he said. “Directors are getting nervous and this has resulted in them taking action.

“There’s a bit of angst and concern among the tax practitioner and adviser group and the director groups.

“I know personally that the people I have been speaking to in the last couple of months that had been ‘dragging their heels’ are now saying we need to do something now, and there’s also a bunch of people calling the tax office too on payment plans.

“So, the intention of the ATO letter is working.”

Mr McInerney said that almost 52,000 ATO letters warning of a possible director penalty notice (DPN) had gone out in March in relation to around 45,000 companies.

Each letter states the amount of debt owing at 11 March 2022, and whether it is the superannuation guarantee charge, pay-as-you-go withholding tax or GST.

“If the company does not pay the amount owing to us or contact us to make other arrangements, we may issue a DPN to each current director and anyone who was a director at the time the company failed to pay,” the notice said.

If a DPN is issued, the ATO  may commence action to recover the director penalty from each director personally.

Mr McInerney said the ATO’s messaging was that the office was back to “business as usual.”

“They’ll listen to taxpayers but they are less likely to give extension requests and debt deferrals out as freely as they have been. This may trigger further outcomes,” he said.

“Right now they are locking people into payment plans and if businesses can’t meet those payment plans, there’s less forgiveness.”

The ATO was also already reporting delinquent taxpayers to CreditorWatch, with the construction sector one of the main offenders.

“About 28 per cent of those letters were sent to companies in the property and construction industry, which is a real hotspot for insolvency right now,” Mr McInerney said.

“The construction sector currently forms a large part of the ATO’s debt book and the ATO is recommending businesses to engage with the ATO repayment of their debts.”

Mr McInerney said the indicators currently being seen from businesses start to paint a clearer picture of upcoming insolvencies.

He said the ASIC data for the March quarter showed an increase of 21 per cent in insolvencies compared to last year and a return to pre-COVID levels.

Of these, 70 per cent were liquidations, 10 per cent voluntary administrations and 1 per cent small business restructures.

“Insolvencies typically increase in the last quarter of the financial year, hence with mounting pressures faced by business owners we can expect to see an increase in the number of insolvencies,” Mr McInerney said.

Mr McInerney said the statistics revealed that since the pandemic, the ATO had paused steps to wind-up a company in court for non-payment of tax debts.

“In fact, up until the ATO issued the warning letters on DPNs in late March, the ATO had not taken any real steps to collect unpaid tax debt,” he said.

“What this means is that directors are taking a proactive step to manage their tax debts.

Mr McInerney said time was becoming increasingly critical to a director when it comes to considering available options.

“This is important when trying to garner the support of the ATO and trade creditors who vote on whether to accept any debt restructure/ turnaround plan offered up by a director as part of the small business restructure and voluntary administration process,” he said.

Mr McInerney said the take up of small business restructures was still low but was expected to rise once the adviser and director community become more familiar with the process and the benefit to their clients.

The ATO was still supportive of debt restructures, he said, whether via small business restructure or voluntary administration.

“A company director should carefully consider whether a payment plan over time is in the best interests of the company,” he said.

“Often directors think this is the better option as it avoids going through a formal restructure process, only to put themselves and staff under immense pressure whilst trying to manage day to day trading and at the same time pay off old debt.

“Unfortunately, what ends up happening is that directors forgo taking a full wage so the company can repay old debt and they do this for two to three years.

Time running out for 50,000 ‘nervous’ directors with ATO debt 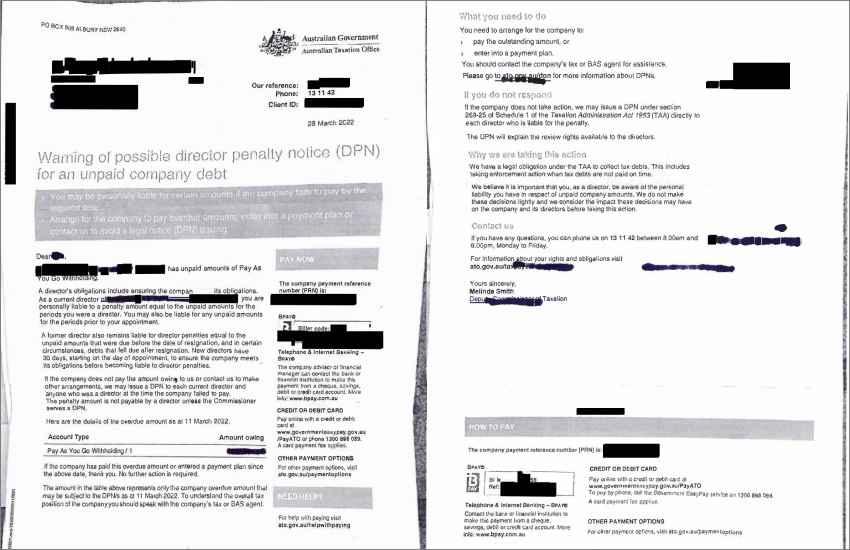