The debt cliff: Is your business prepared?

We’ve seen fundamental changes to the Australian business environment in a short period as a result of COVID-19, with many business owners asking — what’s next?

COVID-19 has resulted in a great deal of uncertainty and, depending on geographic location, businesses have had to remain agile in their response. After nationwide lockdowns in March, we saw an easing of restrictions by June, only to see a new and even more rigid lockdown for Victoria in July when a second wave of COVID-19 infections impacted the state. The situation around the rest of the nation has been mixed, with several localised clusters emerging in New South Wales and Queensland which have so far been contained.

Nevertheless, restrictions on free movement and pre-COVID-19 economic and social activity remain in many parts of the country. Globally, we see the situation escalating, with Europe experiencing a third wave in many geographies, with France and the United Kingdom recently re-entering lockdown situations. While COVID-19 remains active globally and nationally, it’s difficult to determine what will happen next, and with this, it’s evident that for business, risk will remain for some time ­— especially within high-risk industries.

The sudden change to the business environment we felt in March, and then again in July for Victoria, doesn’t quite work in reverse. With restrictions being eased, green shoots began to appear as businesses started reopening; however, as indicated by the disastrous outbreak in Victoria and ongoing uncertainty in New South Wales, a return to normal may be further away than once thought. We will likely see sluggish economic activity as a result of the recession we are in, coincided with the concern surrounding the second or even potential third wave of infections.

As many relief packages, both public and private, were originally planned to end in September, there was a growing concern that without a transition plan, many Australian businesses deferring payments would face a “debt (or fiscal) cliff” and, if unprepared, wouldn’t survive.

As a result, on 21 July 2020, the federal government announced the extension of the JobKeeper relief packages until the end of March 2021 for eligible businesses, with JobSeeker also being extended to December 2020. With this extension, eligible businesses will see their “debt cliff” pushed to March 2021.

However, in light of the worsening situation in Victoria, on 7 August 2020, the Treasurer announced the easing of the tougher eligibility rules for the second phase of the JobKeeper scheme. Now, employers will only have to demonstrate a reduction in turnover in the quarters ending in September and December 2020, and from 3 August 2020, the test date of employment will also move from 1 March 2020 to 1 July 2020.

In addition to the above measures, banks initially gave borrowers the ability to take six-month holidays from repayments, and various legislative provisions passed by the states in accordance with the federal government’s “Code of Conduct for Commercial Tenancies” gave tenants relief from paying the full value of rent for up to six months or more in some instances. These support measures are also expiring from September, with many borrowers and commercial tenants expected to start repaying loans and leases again at normal rates from as early as October 2020.

Therefore, we now have a three-tiered “cliff’ emerging as follows:

While it’s true that directors need to be planning for the here and now, they must also plan to deal with their accrued debts and assess whether they will make it past this tiered debt cliff. Additionally, although the JobKeeper and JobSeeker schemes and safe harbour protections have been extended, the safe harbour for directors now expires on 1 January 2021. Therefore, it is critical that businesses are checking their solvency to prevent directors from being held personally liable in a breach of their duty to prevent insolvent trading.

Over the past few months, we’ve seen many businesses go from panic to information overload to an understanding of how they will make it through. Yet, while some businesses have begun to acclimatise, many aren’t thinking too far into the future.

In this article, we take a recap on what’s happened, analyse the debt cliff that’s coming and direct businesses to rethink a way forward, to come out the other side.

As COVID-19 cases started growing, the government responded by enacting social distancing measures, restricting the movement of its citizens and enforcing closures of certain businesses.

As this unfolded, the response from our clients and businesses generally was of concern and even a hint of panic. By mid-March, our clients started to see revenues falling and many businesses were forced to close. The rising cases, the rapid slowdown in economic activity and uncertainty of the situation were causing a lot of concern and this was reflected on the ASX, with the All Ordinaries bottoming in March (after a peak only a month earlier).

At this time, we were advising our partners and clients on the use of safe harbour, risks of insolvent trading and restructuring options. There was genuine concern for the solvency of many clients and contacts we spoke with. Those in tourism, retail, hospitality, sports, entertainment, hotels, accommodation and education were most impacted.

As COVID-19 cases were rising and the economic impacts were rapidly emerging, the government (and other stakeholders) announced new support measures almost every other day. We were beginning to see the evidence the pandemic was having on trading revenue. Businesses went from panic to a holding stage with cautious optimism as new measures were explained. The discussions we were having around safe harbour and insolvency were no longer critical, with the announcement of the suspension of insolvency laws until September.

During this time, our conversations were around understanding support measures, encouraging clients to build cash flows and understand their runway. As more measures were announced and understood, many businesses came back from the brink — but only in terms of short-term cash flow.

As the government announced plans to ease restrictions, and government and other stakeholder support measures now released, some businesses were starting to see revenues stabilise and new norms understood — with the ability to now comprehend and forecast for the immediate future.

This was the first time businesses were able to forecast with some level of confidence since the pandemic swept across Australia. Most businesses were able to trade through on a cash flow basis for six months because of liability deferrals and JobKeeper assistance. However, there were exceptions, with COVID-19 being the impetus for Australia’s first major corporate collapse, seeing business failures including Virgin, Tigerlily, Techfront and Colette, who all went into voluntary administration.

It was announced by the federal government that economic support packages (JobKeeper, JobSeeker) would continue past the originally planned end date of 28 September 2020, albeit with newly determined rates and eligibility requirements for applicants.

With public and private institutions pumping money into business and households to reduce the financial impact of the pandemic, many businesses have found they can carry on. However, with the recent extension and adjustments to the economic relief packages currently available to businesses, it’s important to stay informed of these changes to avoid unfavourable surprises.

Shortly afterwards on 7 September, the government announced that an extension of safe harbour protections from insolvent trading for directors was extended to 31 December 2021 with the intent that new restructuring laws would commence from 1 January 2021 (these new laws have not yet been finalised).

Some economists believe that Australia is in a position to be government-supported through a long, slow recovery, stating that a sudden stop to government support could be detrimental to the economy.

At the same time, business debts are “ballooning”. Debts such as ATO debt, rent, payroll tax and loan repayments have continued to accrue during 2020 as many business were given payment holidays but not permanent debt relief from these liabilities.

There is a security blanket that is slowly being removed (from October to March) as this economic relief ceases… can all businesses trade out the other side?

What other factors will impact recovery?

At the peak of the debt cliff are the various economic scenarios that are interdependent to Australia’s recovery, including consumer behaviour, the recession, the health and safety of people, and risk of further “waves” as seen in other geographies and the resultant shutdowns to all or parts of industry and community.

Such an economic scenario has already occurred in Victoria as positive case numbers increase drastically. Victoria makes up around 25 per cent of our national gross domestic product and employment, thus the lockdown that came into force on midnight of 8 July 2020 is estimated to wipe out $6 billion in third-quarter national GDP. The lockdown is also likely to cripple consumer spending and be the final nail in the coffin for many small businesses — both of which will further add to the deterioration of Australia’s economic prospects.

With Australia now in its first recession in 29 years, there will be higher unemployment rates — it’s predicted these will go into the double digits before sitting at around 7 per cent. It’s projected that house prices will decrease and this, coupled with COVID-19 concerns, will likely drive lower consumer spending and economic activity.

While the threat of COVID-19 remains in our community, there’s also a material risk for individual businesses. For specific businesses that require close person-to-person contact — such as manufacturing, real estate and construction — extra precautions to keep people safe will impact efficiency, but limit the risk of more shutdowns. For businesses, there may be periodic shutdowns if cases occur among staff or clusters emerge in the local community — or worse still if a second or third wave community outbreak were to occur, as seen in Victoria — likely resulting in a W-shaped economy return, rather than a V.

These considerations need to be factored into scenario plans alongside the debt cliff.

It’s expected that while the shutdowns caused widespread pain for many industries, others have fared better. This table looks at who benefited, who will bounce back and who is at most risk of longer-term pain.

Rethink: Are you prepared for the debt cliff?

Businesses need to be planning now for the cliff and looking ahead to profitability or solvency once support measures expire. It’s also important to consider the other factors impacting recovery. This will mean a rethink on the way businesses do business. There are several considerations your business should be looking at how to avoid falling from the debt cliff, including:

The top 5 things you can be doing now

Businesses must be looking at strategies that will see them through, such as:

1. Businesses need to accept and understand the debt cliff and begin pre-planning. Some businesses will fail if they are not planning for the repayment of their deferred liabilities.

3. Constantly review your business models. As we move forward, some businesses will need to restructure to survive.

4. Continually assessing the macro and micro impacts is critical. There is still a high level of uncertainty. This includes the global impact which has the ability to impact local businesses.

5. Check your solvency/director duties. With the cessation of the temporary safe harbour for director duties to prevent insolvent trading occurring on 31 December 2020, it is critical that businesses check their solvency to avoid the risk of directors being held personally liable for breach of duty.

With the extension of relief measures, there is new-found hope in the business environment. To ensure businesses put themselves in the best position beyond recovery, it’s important they plan beyond the debt cliff, be it September 2020, December 2020 or March 2021, depending on eligibility.

The debt cliff: Is your business prepared? 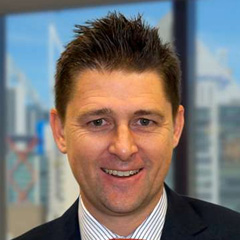